The role of virtual influencers in the Internet world Influencer marketing really does work, and you don’t need to convince marketers anymore. The problem that the brands face may be choosing the right creators. Internet celebrities have surrounded social media and we have already got used to the fact that they can advertise anything. However, the world is going forward, and there are influencers on the web who… do not exist in the real world. I am talking about virtual influencers – products of artificial intelligence or robots that gather their communities and have a real impact on them. Are brands willing to collaborate with these artificial creators and will they replace real influencers?

Who are virtual influencers?

These are usually robots or avatars that have been created as a project undertaking various commercial collaborations through its own social media profile – just like real influencers. They have charisma, personality, and perfect looks, although in reality we will never meet them on the street, and we will not have the opportunity to talk to them face to face. Virtual influencers are a relatively new phenomenon, but their creations and appearance are becoming more and more refined, which may mislead some recipients and they may think that they are dealing with a real person. They are very programmed to appear as real people. Graphic designers and programmers create them using software such as Maya, Cinema 4d, Houdini, Blender, Photoshop or Lightroom.

If we look at it objectively, the characters of virtual influencers are managed in a thoughtful way, and their creation responds to the current needs of the brand they work with. These may be independent projects that will advertise various companies, but in. In recent months several virtual influencers created for a specific brand have already been created (e.g. Colonel Sanders KFC). From the viewer’s point of view, these virtual creations are a breath of fresh air, because no one is hiding from the world of information for what purpose that kind of character was created. In the case of human influencers, it is a difference in terms of authenticity and transparency – there are often situations when the creator is inconsistent in terms of image and advertises everything, regardless of the declared values.

The most popular virtual influencers

In line with the trend, on the one hand brands want web creators to be more human. And on the other hand, they invest in virtual influencers who are less artificial than real-life ones. One of the first virtual influencers is Lil Miquela, who was the product of a mysterious start-up called Brud (after 5 years of existence, the company is worth 135 million dollars). Miquela Sousa is a pop star, one of the 25 most influential people on the internet according to Times and is not a real human but a robot. She has over 3 million followers on Instagram and so far, she has cooperated with, among others, Samsung, Prada, Givenchy, Bershka and Dior. Additionally, during Coachella, she interviewed artists on YouTube. If we want to work with Miquela, we must prepare for an expense of $8,500 for an Instagram post.

However, although Miquela has been online for the longest time, Magazineluiza was the most popular virtual influencer on Instagram in 2020. Lu, because that’s her real name, presents herself as a digital specialist and content creator of the Brazilian company Magalu. It is a chain of multi-brach stores that offers a variety of products. Lu is the face of the brand and uses her own channels on the Internet to promote, review and give tips about the products you can buy on Magalu. Due to the locality of the brand, influencer is known mainly in Brazil, but that did not prevent her from gathering over 5.3 million followers on Instagram and about 2.5 million fans on YouTube and Tiktok.

Brands such as Mattel and KFC have decided to create their own virtual influencers. Mattel is the producer one of the most famous toys in the world, i.e. Barbie. The popularity of the doll certainly helped to build higher ranges, but what we should pay attention to is the way the virtual character is created. As a virtual influencer on her own YouTube channel, Barbie is narrating in first person, which makes her imitate a vlogger. And as you can see, she’s doing well. The channel of VTuber Barbie has over 10.5 million subscribers and has recently collaborated with Netflix, US Open and Pandora.

Does it even work?

Virtual personalities are gaining in popularity. The hypeauditor.com study shows that the most popular digital influencers have a greater impact on their audience than real creators –level of engagement is almost three times higher. 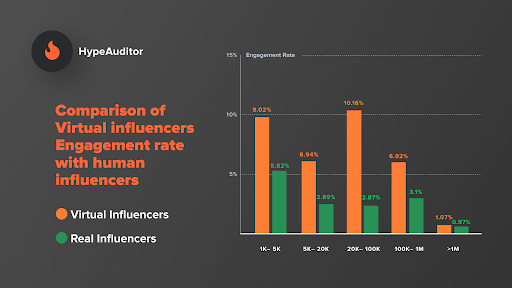 What is more, it does not matter for the youngest generations whether the influencer is real or virtual. If the recipients want to get involved in his/her community and trust this creator, the brand will be more willing to undertake this type of cooperation. However, at the moment, only the greatest who can afford to allocate their advertising budget to an extravagant novelty, no matter how much they decide.

In 2017, the model agency The Diigitals was founded, which associates only digital models. Currently, they can boast of cooperation with large and luxurious brands. The virtual modeling agency carried out campaigns for Vogue Austria, Lexur, Louboutin, Samsung, Balmain and more. As you can see, premium brands boldly bravely decide to cooperate with new technology that often amazes.

Quo vadis, Internet - is there a revolution ahead?

Virtual personalities have the advantage of not making human mistakes and it is easier for them to keep their image in check. They always look perfect, have no bad days, weaknesses, and do not complain about the principals. They arouse more interest, because there are only a few of them for now, where in the real world we have an overflow of influencers. However, if a brand wants to create its own virtual influencer, unfortunately it has to prepare for huge costs. Also, that kind of personality representing one brand could quickly get bored with recipients. What is more, creating such a character may expose the brand to accusations of promoting unrealistic canons of beauty. This is what happened when a graphic photographer created a virtual model Shudu with perfect facial features. However, due to her skin color, the creator was accused of racism and taking job away. From black women. Who, as real models, would never match the creation created in the graphic program.

Virtual influencers do not only exist in the world of fashion. They also often raise socially important topics that can certainly influence the worldview of many followers. Lil Miquela, mentioned above, declares herself a friend of LGBTQ+ and supports the Black Lives Matter movement. What is more, in 2018 she donated $100,000 to charity. However, there are many options that digital characters are not about art, but manipulation, which is mostly profit-driven. At the moment, despite many controversies, doubts and fears, more and more brands are testing cooperation with influencers who do not exist in reality. Who knows, will it become normal for us after a while? Just a few years ago, real Internet creators were also something new for us, which marketers approached with extreme caution.

Would you like to see what else we have written about? What is remarketing in a nutshell? What is online content? How to take care of your website to reach as many recipients as possible? Here are some simple optimization tips. Why should SEO be a part of your overall marketing strategy?

How to run an effective and profitable business in the modern digital world? How to combine a marketing strategy with optimization and positioning?

with the comprehensive
SEO audit

Invest in a detailed SEO audit and understand your online performance. We analyze your website to get a clear view of what you can improve.

Go back to the home page